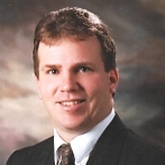 Since 1992 Jeff has been working to complete his LUTCF.  He has successfully completed the first four of five classes needed to obtain his LUTCF.  Besides having his Life, Health and Annuity licenses, Jeff plans to expand his horizons through education in various areas of business.

Jeff has consulted with clients in Indiana and Ohio for the past fifteen years.  He has gained knowledge in Life, Annuities, Disability Income and Employee Benefits, such as Group Health Insurance.

Personal: Jeff was married in the fall of 1998 to Mellissa.  Their oldest son Joey was born in the fall of 2000.  Their youngest son Matt was born in the summer of 2003.  He is involved and is a member of the Portland Masonic Lodge, is a member of the Board of Directors for Jay County Salvation Army, and is a past member of the Board of Directors of Jay County Boy's Club Community Center.  Jeff and his family attend Asbury United Methodist Church and reside in Portland, Indiana.